Ashton Tolliver has been appointed as the Fire Chief for the City of Mayflower Fire Department by Mayor Randy Holland, effective September 2021.

In August of 2016, Chief Tolliver began his career in fire service with the Oak Grove Fire Department as a volunteer and part-time firefighter, where he met the standards for Firefighter 1 & 2 certification and worked his way up to the rank of Lieutenant.

While at Oak Grove, Ashton was employed by the Arkansas Forestry Division, where he worked as a Wildland Fire Dozer Operator, for almost three years, covering Pulaski and other neighboring counties when called. Chief Tolliver also was hired by the Arch Street Fire Department in Southern Pulaski County, where he still remains as a Captain.

Then, continuing to chase his dreams, Ashton was hired by the City of Alexander Fire Department as a firefighter. At his one-year mark, Ashton was promoted to the rank of Engineer. He, also, received his credentials for Instructor, Health and Safety Officer, and Officer.

Chief Tolliver is currently in the process of finishing up his part-time law enforcement certification so he can act as a Fire Marshal and plans to return to college in the spring to earn a degree in Fire and Emergency Response.  Since being hired, Chief Tolliver has relocated to Mayflower to better fill his role as Fire Chief for the City.

“I am very excited to be given this chance as the Fire Chief and plan to move this department forward and better serve our community. I am pushing recruitment and retention for volunteers because without them, we would not be able to serve the community. A training program is in the works to get all of our volunteers the training they need and want. I am excited to be a part of the growth that we are seeing and I am excited to see where we go from here. I have also hired an Assistant Chief that works part-time and responds to assist in major incidents within our fire district. I plan to put our community first and become more community involved because the community deserves the best in their time of need. I look forward to seeing what happens in the future with this Fire Department.” 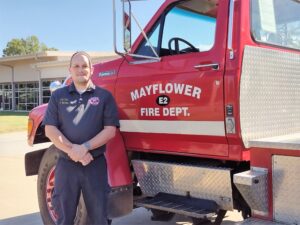 Chris Matthews has been selected as the part-time Assistant Fire Chief for the City of Mayflower Fire/Rescue Department by Fire Chief Ashton Tolliver, effective September 2021.

Assistant Chief Matthews began his fire service career in 2012 in the city of Maumelle as a volunteer firefighter. In that role, he attained his Firefighter I/II certifications through the Maumelle Fire Department.

Then, he joined the nearby Oak Grove Fire Department in Pulaski County in a volunteer and part-time capacity, where he worked his way up to the rank of Captain. During this period, he also worked to obtain his National Registry of Emergency Medical Technicians-Basic (NREMT-B) licensure and various other Arkansas Fire Academy credentials such as Arson Investigation and Instructor I.

Presently, Chris works as a full-time Engineer/EMT for the City of Alexander Fire/Rescue Department.

“I am very excited to be a part of this growing community and excited to see what Chief Tolliver and I can do to move this department forward. We hope to bring the best customer service we can to the residents and visitors to our Fire District and City.”

Josh Woods was named as the new Fire Chief for Mayflower, after serving as a volunteer firefighter with our department since 2015, and comes to us from the Sherwood Fire Department, where he has worked since 2002.

Josh is a graduate of the Arkansas Fire Academy and holds degrees in Fire Science and Emergency Medical Services. Chief Woods is certified as a Fire and EMS Instructor and has attended more than 35 Fire, EMT, and Specialty classes to remain current in his field.

He is currently: President of the State Fire EMS Board, a board member of the Arkansas EMS Association/CPS Board, and is on the State Critical Incident Stress Management Team.

Josh lives in Mayflower with his wife and two children and is an active member of our community.

“I am devoted to Mayflower’s future to provide safety and security for my family, friends…and the residents of this community. I feel proud to call Mayflower my home.”

are shown with a $10,000 donation from Exxon Mobile

to help with the cost of the City Hall Safe Room,

which will house the emergency communications equipment.

Emergencies can happen at any time. Do you know how to get in touch with your family if you are not together?  FEMA has provided some helpful planning pages to help you and your children be  prepared in case an emergency arises.

Mayor Randy Holland and Fire Chief Carl Rossini were present to receive their grant of $18,250 from Representative Doug House.

The Mayflower Volunteer Fire Department finally got several new improvements to the exterior of the building, allowing it to blend in with its surroundings.  The parking lot was also redone to repair the existing blacktop, which had begun to buckle under the weight of the fire trucks driving over it for so many years.

within 5  driving miles of this substation on Easterwood Point Road.

to determine the status of any

burn bans at this time.

Most of the time, Mayflower’s Burn Ban

will be the same as Faulkner County’s.

The link below shows any state-wide burn bans by county.

Fire 3-22-10. Firefighters with Pine Village and Mayflower fire departments responded Monday afternoon to a fire at 392 Sturgis Road. Mayflower Fire Chief Carl Rossini said at the scene that he was among the first firefighters to arrive and found half of the residence engulfed. The efforts of these and other firefighters kept the fire contained, but the residence was destroyed. One man lived in the residence, according to a family member, and he was not home when the fire started. This family member said that arrangements had been made for the man to have a place to stay.

Trash Service for Newly Annexed CustomersNewly annexed customers can set trash out this Thursday for Waste Connections. They are working as fast as they can to get everyone set up properly. You can place bags of trash at the curb or in a bin you currently have until their cans arrive. Schedules for trash, recycling, yard waste, and bulk pick-up are available at our office. For additional questions contact our office during normal business hours. Monday - Thursday 7:00 AM to 5:30 PM at 501-470-1818. ... See MoreSee Less
View on Facebook
· Share

City Council meetings are held on the 4th Tuesday of each Month. We encourage all citizens to attend our regular meetings to stay informed about the various activities of your city government. ... See MoreSee Less