The city of Mayflower is located in the middle of an area known as Muskogee Silt Loam, originally belonging to the Choctaw Indians. The Choctaw sold this land to the U.S. Government and moved to a reservation north of Conway.

Mayflower’s earliest settlers came in 1778. They had been Tories during the Revolutionary War and were moving westward to get a new start. Later they moved on as new settlers came and “crowded” them out. New Settlers found good rich soil, ample supply of water, excellent hunting territory, and a rich source of timber which were all vital to pioneer living. Soon the land along the Palarm and Arkansas River was homesteaded and gradually moved northward to the present area. Flannagin and Massengill were two of the earliest settlers.

In 1871 at Twenty Mile Camp the railroad construction superintendent used a Pullman car for his headquarters. His telegraph call was “Mayflower” – thus the name remained. This area furnished the trees for wood to be fed into the hungry maws of the stream driven engine up to 1893. Cross ties were cut from the timber also. Mr. Lorentz erected a small general store as early as 1870 that furnished necessary items for the community. Other family names of this period were Gibson, McCoulbrough, J.R. Dickens, Taylor, Irby, Ledrick, Adams, Dukes, Little, and Miller. Williams’ saloon opened at the same time. Dunlap had a saloon also and it was said that his stock would not fill a wheel barrow. Cotton plantations using share croppers thrived. Thus, within a short while Mann Nichols constructed a steam cotton gin near the Little Plantation. At one time cotton gins were in or near Mayflower. 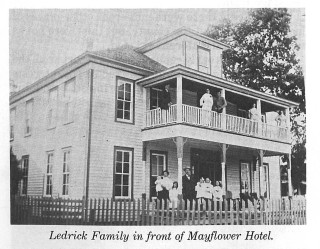 The first post office opened November 9, 1880, with Worley E. Vanlandingham as first postmaster. Nichol’s Inn was a stagecoach stop for travelers going from Little Rock to Clinton. Mail was carried by stage at this time. The Ledrick Mayflower hotel was built later.

In 1870 the Odd Fellows had a log building for their use but later gave it as the school building. It was located west of the railroad near the present elementary school, Later Woodman of the world built a larger two-story building and it was used as a school. This log house was enlarged several times and was used as a school, church, community center as well as for the Woodman of the World Order. A brick veneer building replaced this log and frame building in 1929 at the site of the present elementary school. Richard Nichols (Knickols) had been an officer in the Union Army and was the first teacher. His philosophy was “to spare the rod – you spoil the child”.

By 1916 there were three churches; a two story hotel owned by John F. Ledrick who owned one of the stores also. Wiley Mosley came in February 1894 and bought a plot of land from Dr. V.G. Dickens and built a store which operated until 1940. During this period such businesses as a wagon yard, grist mill, blacksmith shop, shingle mill, stave mill, and sawmills served the growing needs of the community.

Hays Realty Co. came November 10, 1917 from Tennessee and bought up land and began residential development. Several things happened to give a spurt of growth – namely:

The railroad made regular stops at the Mayflower station until July 21, 1931, when it was closed. Passengers were permitted to use it but tickets had to be purchased on the train.

Schools were consolidated in the early 1930s – Dew Drop, Providence, Lollie, Riverside, Palarm, Jones Hill, Washam and Chadwick. These small one room schools were abandoned and children were transported by school buses into Mayflower. Bertha Willett was one of the last teaches at Washam School which was located near Narrows Bridge across Palarm Creek. In 1934 the brick building was destroyed by fire. A bucket brigade of townspeople saved the agricultural building.

During the depression of 1933 a “canning kitchen” was set up to help the farmers to preserve food grown on the farms. Gena Hathaway was the operator.

A beautiful Magnolia tree at the corner of Center and Miller streets, approximately 100 years old – is one of the historical markers.

Early telephones were located in stores or other places of business. Today the 470 exchange out of Conway serves the community. Saxton Springs, one mile north of Mayflower, was a favorite picnic area in the earlier days. As of 1986 Mayflower residents had easy access to Little Rock and Conway and could go there for work. However, many remained at home because Mayflower could boast of having: Blackhawk Molding Company, Microfim Co., custom – made ironworks, Iron Works Shop, two banks, drug store, two garages, service station, four groceries, plumbing and electrical shop, fire department with two trucks, police station with two cars and three policemen.

Ada Brong Irby is remembered as an angel of mercy during the flu epidemic in 1918 as she went with Dr. W.W. Skelton and Dr. J.A. Summers into homes to aid the ill. She was a regular mid-wife assisting Dr. Kitley until her death in 1944. Her pay came from the gardens and poultry yards.

Mayflower cemetery is a community project – all markers are carefully documented and maintained with volunteer support. Only 12 graves, with markers, can be identified prior to 1900. Earliest birthdates recorded is Dr. Greenlee – December 18, 1829 to January 4, 1917.

Churches: Baptist, original 1895 with 5 members. They met at first in a one room building. They now have a nice rock building. Wiley Mosley donated the land. First deacons were J.A. Summers and Carl Atwater, E.F. Simmons was pastor. Methodist Church was organized in 1880 with Thomas A. Alexander as circuit rider preacher. Church of Christ was reorganized in 1980 after 20 years of irregular service. J.C. Mosley, J.C. Dawson, W.W. Still and Van Winker were early preachers. There are four branches, located in four areas of the community of the Pentecostal faith. Cleve Steed donated the land for the first building.

A Message from Waste Connections:Waste Connections (based out of Heber Springs) will be running their trash routes one day later than normal (Friday and Saturday) due to icy conditions on the roads. Thank you ... See MoreSee Less
View on Facebook
· Share

City Council meetings are held on the 4th Tuesday of each Month. We encourage all citizens to attend our regular meetings to stay informed about the various activities of your city government. ... See MoreSee Less